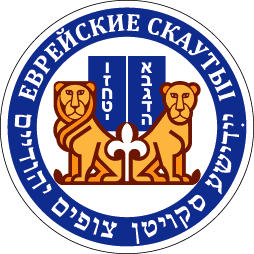 Depending on the language, there are many ways to name a Scoutmaster. To facilitate understanding beyond our mother tongues, we propose to use the Hebrew word « Madrich / Madricha ».

A Madrich accompanies and grows his scouts for several years; he is not a moderator of some activities.

In French, we use the word « animateur » which means to give life, breath, spirit, to give soul, a beautiful definition to characterize the mission of Madrichim.

Responsibility means: I, my brother, others, and what will occur after me.

“Responsibility is one of the most important midot (midah, pl. midot, measure in hebrew) to cultivate in one’s soul. Acharayut (responsibility in Hebrew) comes from the root “acher” (other).

To take responsibility means to cultivate the “ability” for response to an “other.” This responsibility to another is born in the moment where no one else is present to assist.

As Hillel said (Avot 2:6) “uveemkom sh’ain anashim hishtadail lihiyot ish”: in a place where there aren’t people of moral courage taking responsibility, one needs to step up. The Rabbis learned this lesson from Moshe Rabbeinu himself (Shemot 2:12).

Rather than look to others to create our meaning, our opportunities, or our missions, we are charged to be proactive.

Gandhi famously said “Be the change you want to see in the world.” G-d comes to love Avraham Avinu because he and his children are “Shomru Derech Hashem Laasot Tzedakah u’Mishpat, to keep the ways of Hashem, to do righteousness and justice” (Bereshit 18:18). Here we learn that the Jewish people are born in our becoming shomrim.

Viktor Frankl, the great Jewish psychoanalyst, once said that “Being human means being conscious and being responsible. By becoming responsible agents for social change we actualize not only our humanity but also our mission as Jews. »

A Madrich, a Jewish Scoutmaster

THE MISSION OF A MADRICH IS TO DREAM AND GROW YOUNG PEOPLE.

KADIMA — The Jewish Scout Trail for Leaders
A A4 single two-sided page printed, then folded in four and stapled.

A SHEVET LEADER ASSUMES MORE RESPONSIBILITIES THAN A MADRICH.

Responsibilities that he has undertaken to assume arise from a number of imperatives that he must face and bear in mind in order to give his action its full meaning and effectiveness.

In addition to being a good facilitator: