« If Homer hadn’t written, would we remember Troy? Who would have heard of Guernica, that little village of nothing, if it hadn’t been for Picasso’s painting? Who would have transmitted what Giacometti transmitted without being aware of it, with that emaciated man walking towards the unknown? The unspeakable can only be told through the narrative. » (Rachel Ertel)

The Shoah (Hebrew: שואה, « disaster ») was the systematic extermination by Nazi Germany of between five and six million Jews, two-thirds of the Jews of Europe and about 40% of the Jews of the world, during the Second World War.

Jews, designated by the Nazis as their irreducible enemies and assimilated to an inferior race according to their ideology, were starved to death in the ghettos of occupied Poland and the occupied USSR, murdered by the massive shootings of the Einsatzgruppen on the Eastern Front (the « Shoah by bullets »), by forced labour in the concentration camps, in « gas trucks », in the gas chambers and crematoria of the extermination camps. This part of the Shoah makes it the only industrialized genocide in history.

It is a language, the Yiddish, and a millennia-old culture that almost disappeared after this tragedy. Who would have thought that klezmer music – the music of Jewish weddings in Eastern Europe – would become a vibrant and dynamic world music from the 1990s onwards?

Singing a song in Yiddich is like lighting a candle; it is the most beautiful prayer of remembrance! 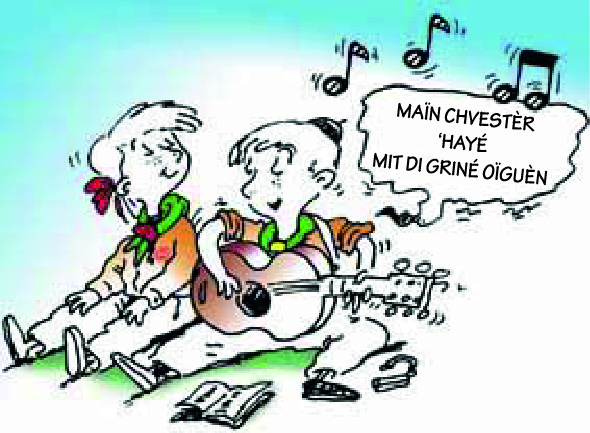 I recommend this poem in Yiddish from Binem HELLER (1908-1998) “Mein shwester Chayei” set to music by Chava Alberstein that we discovered in the album The Well of the American klezmer group The Klezmatics.

Chava ALBERSTEIN in Israel, and KLEZMATICS in the United States testify through their work to the permanence and modernity of Yiddish song and klezmer music.

This moving poem reminds us:

May Chayei become your little sister. Through your song in Yiddish, it is her memory and that of all the deported children that you will honour.

This lullaby comes from the Vilna ghetto. Tens of thousands of Jews were killed in the Vilna Ghetto, Lithuania, from 1941 to 1943. Amid horrible circumstances, the Jewish people began to create powerful art; theatre productions, poetry, and music performances.

The words to this lullaby were written by Leah Rudnicki (pronounced Rudnitzky); the music is by Leyb Yampolski.

Taken from the album: “With a Song In the Heart – Shabbath and Holiday Yiddish Songs” – Preformed by Tova Ben-Zvi.

Klezmer musician Daniel Kahn performs the moving song, which he translated with a little help from his friends.