Rovers Commitment Lapel Pin
“Jewish Scouts“ is written in the Scout national language,
in Yiddish (a reminder of the Jewish people before the Shoah)
and in Hebrew (the language of Israel).

The Jewish Rover Route
The Jewish Rover Route offer to young adults to belong to an international network to act, to serve, to study, to look beyond action, to support each other and to progress. Together, Jewish Rovers put special focus on active travelling and multicultural experiences, Limmud (Jewish studies), adventures in the wilderness, community service,  social and economic integration, creativity, music, songs and dances.

Adult support and the relationship between Rovers and their leaders is an important part of Scouting. Adults in the Jewish Rover section are facilitators or advisors.

The Jewish Rover section works in a particular way within the Tsofim Yehudim. The Rovers organize themselves in networks according to the projects or the actions to be carried out at the local, national and international level.

The Jewish Rover Trail leads each young adult, step by step, to take charge and become autonomous. May be becoming a Sower.

The Jewish Rovers commit, individually and collectively, to behave in a manner that is a credit to the Scout Movement.

Focusing on young people who do not intend to take position in Shevet or those who have finished, the Jewish Rover Trail is open to any motivated person, eager to get involved in the realization of social projects, humanitarian, militant, and to give the scout movement the benefit of its experience and know-how.

In the service of the Scout Movement and Jewish communities, all Rovers wear a similar dark red neckerchief (symbolic color of the rover section) with their national colors ribbon sewn on top of the border. 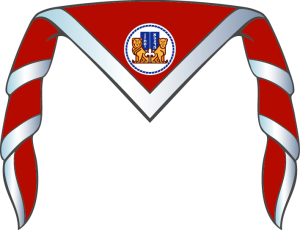 The Jewish Rover Scout Commitment Ceremony
The first year with all his/her brother and sister Rovers scouts gathered, the Rovers Scout publicly commits him/herself while saying the Jewish Rules of Life Commitment (inspired by a quote from Chief Fleg from France):

This is the Tsofim Yehudim emblem within a red circle (the red color is the symbolic color of Rovers chosen by Baden-Powell).

The Seven Steps on the Rover Trail
The Rover Trail offers seven steps that are as many opportunities to discover, learn, meet and share:

* It is possible to set up a solidarity project with a community or an association and to implement it within the framework of the European Voluntary Service.

The Jewish Rover Network
While developing their specific projects, Jewish Rovers serve the Scout Movement and Jewish communities according to their know how, training and experiences.